Travel the circuit full of buildings that preserve treasures on their walls that are the testimony of an era and are part of the cultural legacy of the city.

Walk through some of the most emblematic and beautiful murals you’ll find in Mexico City.Muralism has been a big thing in Mexico for almost a century and some of its exponents are also considered to be among the country’s greatest artists. Murals are much more than just aesthetics though; they act as detailed representations of the political and social environment of Mexico throughout its history. If you’re interested in learning some Mexican history, murals are a great place to start. Most of them are in historical buildings and museums you can not miss in your visit.

There are 4 emblematic places that this tour considers to enjoy the muralist movement, of which 2 buildings are entered depending on the day of the week. From Tuesday to Friday it includes a visit to the National Palace and the Secretary of Public Education (or the Colegio San Ildefonso if you request it at the beginning of the Tour). On weekends we visit the National Palace and the Palace of Fine Arts.

You will see us with the orange shirt and orange umbrellas

Every day available, but Monday 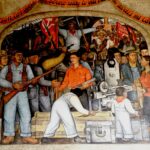 Open chat
Need information?
Powered by
Hello 👋
Can I help you?